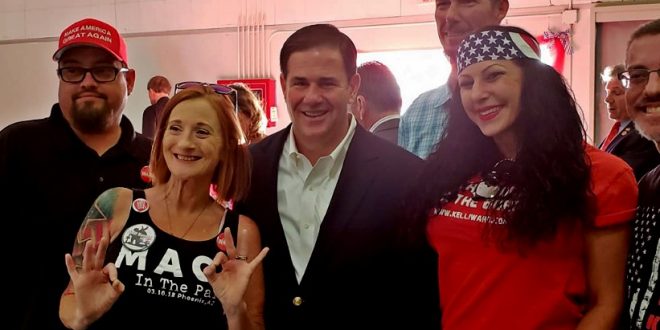 Gov. Doug Ducey faced new criticism this weekend for photos he took with a controversial grassroots group. While appearing at the Mohave County Republican Party’s Patriot Dinner Saturday at the Mohave County Fairgrounds, Gov. Ducey posed with members of Patriot Movement AZ, a small but vocal activist group known for bringing guns and yelling at people at events in metro Phoenix. In the photos, group members made the hand sign for OK, which in recent years has been called a symbol of white supremacy.

As some Democratic lawmakers and activists call for Ducey to denounce the group, the Governor’s Office says he did not know who the group was and that the photo was inconsequential. In an interview with The Arizona Republic on Sunday, Patriot Movement AZ founder Lesa Antone said otherwise. “He knows who we are. Everybody there knew who we were,” Antone said.

Antone confirmed that between five and 40 Patriot Movement AZ members regularly appear at political events and protests in Arizona. Many members regularly wear guns in holsters on their hips. In March, two women who’d published photos and videos indicating they were supporters of the group sparked international backlash after filming themselves snatching items from a Tempe mosque. They were indicted on charges of third-degree burglary and aggravated criminal damage.

Previous Lindsey Graham: I Want To Be There If Trump Wins The Nobel Because A Lot Of Liberals Would Kill Themselves
Next CPAC Director Matt Schlapp: Journalists Don’t Get To Say If Trump Is Lying, That’s For The Public To Decide