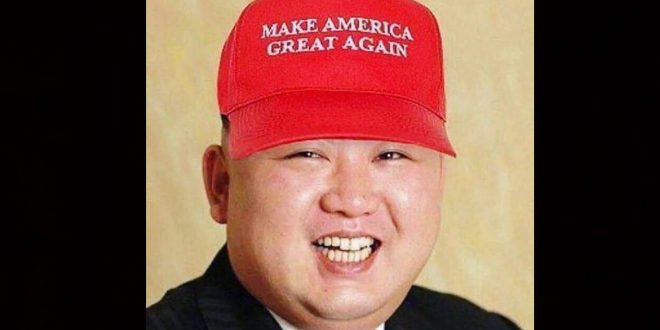 Dennis Rodman: This Photo Is What I’m Hoping For

If Dennis Rodman has his way, Kim Jong-Un will be wearing a “Make America Great Again” hat after his potential meeting with Donald Trump. Rodman has bizarrely served as an unofficial ambassador from the United States to North Korea since Kim took over power in the country. The former NBA star was one of Kim’s favorite players when he was growing up and Rodman famously visited North Korea last summer.

So it was inevitable that he’d weigh in on the possibility of a face-to-face meeting between the North Korean dictator and the United States president. And he did so on Friday with a picture of Kim wearing one of the famously cheap-looking MAGA hats. You’ll notice that Rodman says he considers both Trump and Kim friends. If that’s a true statement, Rodman may truly be the only person in the world who is friends with both.

Hoping for this after my two friends and leaders meet next month.#Peace #Love #NotWar #Diplomacy pic.twitter.com/NEZijYzoLi

Crazy Dennis Rodman is saying I wanted to go to North Korea with him. Never discussed, no interest, last place on Earth I want to go to.