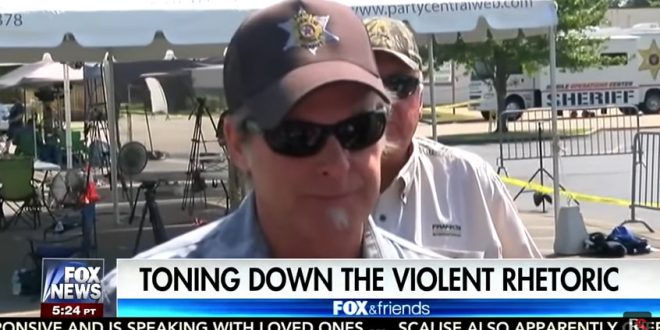 Conservative rocker Ted Nugent on Sunday blamed Democrats for inciting vicious partisan rhetoric and insisted that he had “never threatened anyone.” Following the shooting of Rep. Steve Scalise (R-LA) and other Republicans at a congressional baseball practice last week, Nugent announced that it was time to stop using incendiary rhetoric to demonize political opponents.

On Sunday, Fox & Friends noted that liberals are calling Nugent a hypocrite because he once told then-President Barack Obama to “suck on my machine gun.”

“Let me make it perfectly clear, I have never projected hate,” Nugent insisted. “When I said that about sucking on my machine gun, that was a direct response to the liberal Democrats — Obama and Clinton, et al — [trying] to ban certain types of firearms, violating their oath to the Constitution and the Second Amendment.”

Nugent went on to say he’s “reaching across the aisle” with a plea for civility, but that he’s probably wasting his time because Democrats just want to burn down buildings if they disagree with you.