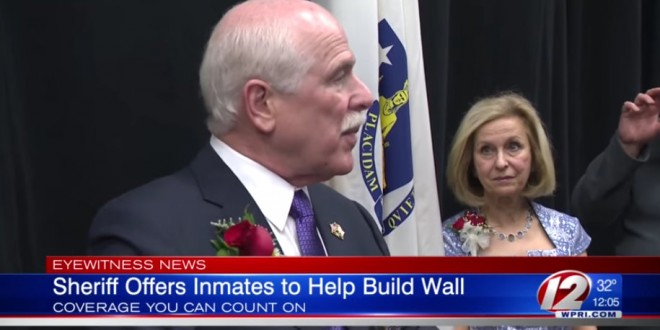 Should President-elect Donald Trump move forward with plans to build a wall along the U.S.-Mexico border, Bristol County Sheriff Thomas Hodgson would like inmates from the Bristol County House of Correction to do some of the work.

“I can think of no other project that would have such a positive impact on our inmates and our country than building this wall,” Hodgson said Wednesday during his swearing-in ceremony to begin his fourth six-year term in office.

Hodgson, a longtime critic of illegal immigration who frequently assailed President Barack Obama’s immigration policies, offered the free inmate labor to the incoming Trump administration through a conceptual national program he calls Project NICE – National Inmates’ Community Endeavors – that, like Trump’s wall, is currently an idea and not a concrete reality.

Even after a press conference with Hodgson following Wednesday’s ceremony at Bristol Community College, questions remained as to which government agency would pay to transport and house hundreds, or even thousands, of inmates from across the country. The sheriff said those logistics would need to be worked out with the federal government, which he claimed is already spending “millions” to fly undocumented immigrants across the country anyway.