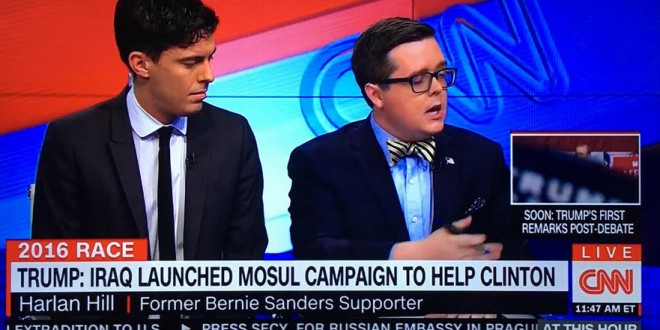 In one of the looniest exchanges we’ve seen (today, at least) Bernie Sanders backer turned Trump surrogate Harlan Hill battled former Jeb Bush spox Tim Miller at great length before declaring that Hillary Clinton is “planting the seeds” for contesting the election by mentioning Russia’s hacking. Or something. The dumbfounded CNN host responded, “This is the first time we’re hearing something like that.”

Bernie Bro for Trump (seriously) on CNN: Hillary hacked her own servers in order to contest the election. #debate pic.twitter.com/MrYvn7lgzl

I swear if the desk wasn't in the way, there would be kicking to accompany @Harlan's screaming tantrum. pic.twitter.com/CiwWpmrfWN