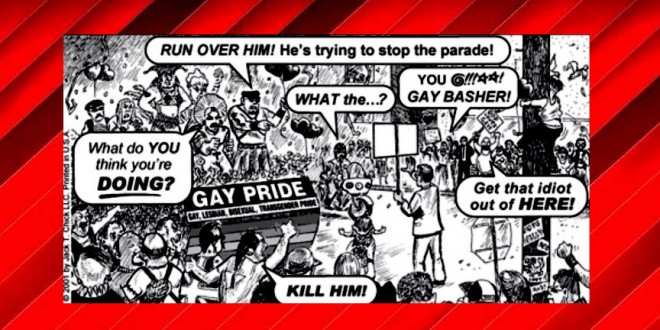 Nutjob evangelist Jack Chick, creator of the vicious (and often laughable) Chick Tracts, has died at the age of 92 according to his company’s Facebook page. From his Wikipedia entry:

Many of Chick’s views were controversial, as he accused Roman Catholics, Freemasons, Muslims, Jews, and many other groups of murder and conspiracies, while Chick maintained his views were simply politically incorrect. His comics have been described by Robert Ito in the Los Angeles magazine as “equal parts hate literature and fire-and-brimstone sermonizing”.

Chick’s views have been spread worldwide, mostly through the tracts and now online. His company, Chick Publications, says it has sold over 750 million tracts, comics tracts and comic books, videos, books, and posters designed to promote Evangelical Protestantism from a Christian fundamentalist perspective or point of view.

They have been translated into more than 100 languages. As evidenced from his writings and publications, Chick was an Independent Baptist who followed a premillennial dispensationalist view of the end times. He was a believer in the King James Only movement, which posits that every English translation of the Bible more recent than 1611 promotes heresy or immorality.

Chick famously refused to be photographed, but it’s not clear why. Brothers and Sisters in Christ:

Previous Elizabeth Warren To Trump: Nasty Women Will Cast Our Nasty Votes To Get Rid Of You Forever [VIDEO]
Next PENNSYLVANIA: Former Dem AG Kathleen Kane Sentenced To 10 To 23 Months In Prison For Perjury