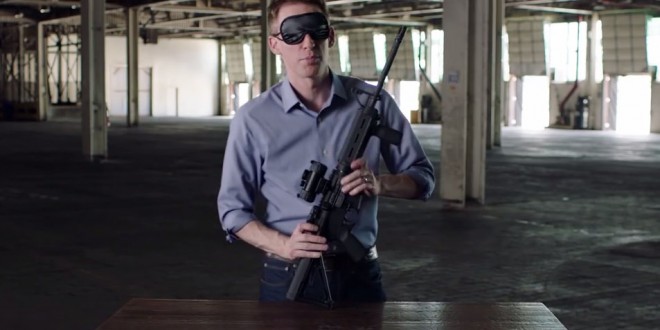 Missouri U.S. Senate candidate Jason Kander is up today with a new commercial in which he assembles an AR-15 semi-automatic rifle blindfolded — then taunts, “I’d like to see Sen. Blunt do this.”

The mano-a-mano ad is a response to attacks on Kander, a Democrat, by the National Rifle Association, which has endorsed incumbent Sen. Roy Blunt, R-Mo. Kander, currently Missouri’s secretary of state, describes himself as pro-Second Amendment, but also has supported expanded background checks and other restrictions.

In the ad — the latest in a series of firearms-themed political ads among Missouri candidates this year — Kander touts his military background, which Blunt doesn’t have. Assembling a firearm while blindfolded is an old standard in military training.

“I’m Jason Kander, and Sen. Blunt has been attacking me on guns,” Kander, blindfolded, says into the camera while standing in a large warehouse, a table and disassembled rifle in front of him.

“Well, in the Army, I learned how to use and respect my rifle,” says Kander, as he starts snapping the pieces of the weapon into place. He continues the assembly while recounting his service in the war in Afghanistan and his support for gun rights as a former state legislator.

Previous Trump Releases Doctor’s Letter With Statement Mocking Hillary’s Campaign “Interruption” Due To Illness
Next Donald Trump Jr: If Republicans Lied As Much As Hillary, The Media Would Be “Warming Up The Gas Chamber”