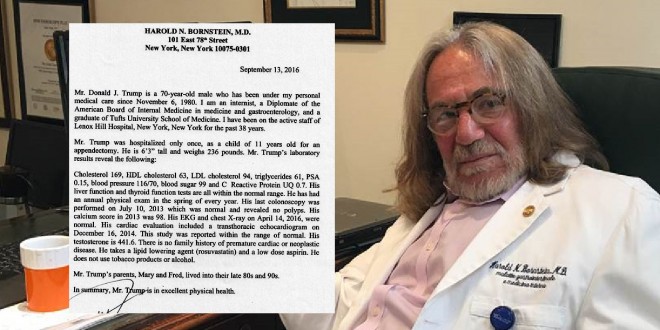 Donald Trump on Thursday released a letter from his doctor claiming he is in “excellent physical health,” the same day as his appearance on “The Dr. Oz Show” to discuss the results from his recent physical. Trump’s campaign trumpeted his results in a statement, taking a shot at rival Hillary Clinton’s stamina and ability to serve as president.

“We are pleased to disclose all of the test results which show that Mr. Trump is in excellent health, and has the stamina to endure — uninterrupted — the rigors of a punishing and unprecedented presidential campaign and, more importantly, the singularly demanding job of President of the United States,” the campaign said.

The letter notes that Trump takes cholesterol drug Statin. But while Trump’s height and weight would put him at a body mass index considered overweight by the National Institutes of Health, the letter declares that the GOP presidential nominee is in “excellent physical health.”

Trump is 6-foot-3 and weighs 236 pounds, the letter said. Testing results showed that Trump’s cholesterol is 169 mg/dL, with his HDL level at 63 mg/dL, his LDL level at 94 mg/dL and his triglycerides at 61 mg/dL. His blood pressure during the recent exam was 116/70 and his blood sugar was 99 mg/dl.

The letter adds that Trump’s liver and thyroid tests are normal and that results from a 2013 colonoscopy, as well as an EKG and chest X-ray from this past April, were also normal.