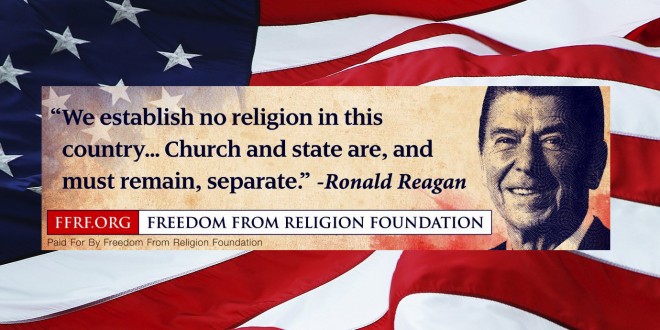 The Freedom From Religion Foundation and its Cleveland chapter are mounting an impressive 14-by-48-foot message to the Republican National Convention: Keep church and state separate. That message on a highway billboard comes from an unexpected source: President Ronald Reagan. “We establish no religion in this country . . . Church and state are, and must remain, separate,” he said in the quote featured on the billboard. The board is going up this week in Cleveland on Interstate Highway 71 north of 480 and will remain up for a month. FFRF is a state/church watchdog group with 24,000 nonreligious members nationwide, including more than 600 in Ohio.

“We in the United States, above all, must remember that lesson, for we were founded as a nation of openness to people of all beliefs. And so we must remain. Our very unity has been strengthened by our pluralism. We establish no religion in this country, we command no worship, we mandate no belief, nor will we ever. Church and state are, and must remain, separate. All are free to believe or not believe, all are free to practice a faith or not, and those who believe are free, and should be free, to speak of and act on their belief.”

Previous GOP Rep. Steve King: Nobody Would Have Been Shot In Orlando If The Patrons All Had Guns [AUDIO]
Next Brian Brown: Our Hate March Was A Great Success