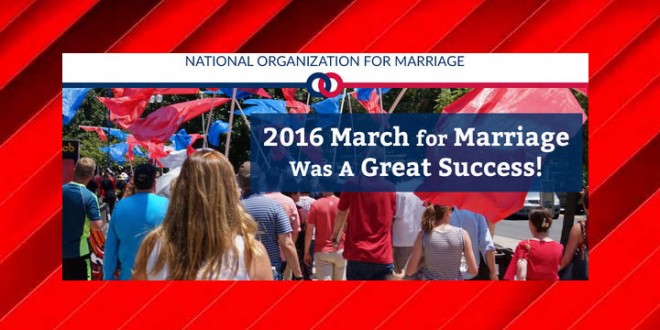 Brian Brown: Our Hate March Was A Great Success

After three days of relentless mocking on social media, hate group leader Brian Brown has finally surfaced to declare that Saturday’s hate march was a huge success. This, despite a physical head-count by ThinkProgress showing that only 237 people turned out. And that count included babies, passersby, counter-protesters, and the media. Brown writes:

I’m writing with great news — the 2016 March for Marriage this past Saturday in Washington was a tremendous success! We had about 400 people join us at the rally and march and they were an enthusiastic and inspiring group of supporters!

Many families came together to march. One family I spoke with drove down from Philadelphia. Another family came from Long Island. We had people join us from as far away as Utah and California. I met people from throughout the north east and the south. One supporter even came from Sri Lanka to be with us! In short it was a great event! You can see some photos here.

Of course, like in the early years of the March for Life after the Roe v. Wade decision, we expected that the crowd would be smaller than past marches because people are still grieving from the US Supreme Court’s illegitimate decision redefining marriage. But continuing the March for Marriage gives supporters of marriage an important event to rally around and come to realize that they are not alone in supporting marriage as the union of one man and one woman.

So like the annual March for Life, we are very confident that as word spreads, the size of the march will continue to grow every year going forward. You can make a difference! Donate Today!

Brown continues by declaring that he’s confident that the anti-LGBT First Amendment Defense Act will be voted on “very soon.” And that’s he’s still thousands of dollars in the hole from hosting Saturday’s massive crowd. So send more money. Heh.