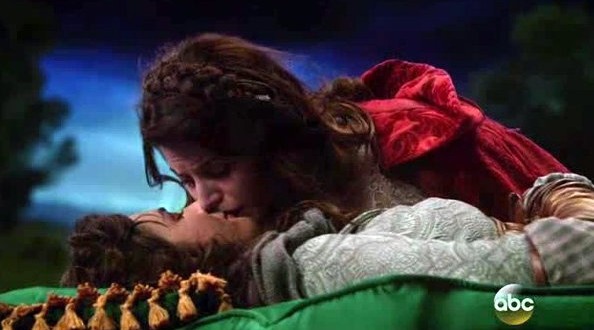 One Million Moms Vs ABC’s Once Upon A Time

ABC’s “Once Upon a Time” introduced a lesbian couple during this week’s episode which 1MM and parents find completely unnecessary. On the other hand, the producers said the inclusion of homosexuality in a show popular with kids was “important.” Many families watch the program based on beloved children’s fairytales, but unfortunately, ABC has distorted and twisted the storylines in these fables.

In a series of flashbacks, a romance brews between the two women. A sleeping curse leads Ruby to bestow true love’s kiss on Dorothy to wake her. One kiss breaks the spell, but many follow in a brief make out session as the munchkins from Oz watch.

“Once Upon a Time” is a far from innocent fairytale entangling favorite Disney characters in a new, modern storyline. When it debuted in 2011 it was called “the most family-friendly drama on any broadcast network in the past ten years” and Common Sense Media rated it for children 12 and up. So naturally, with its family-friendly 8:00 pm ET/7:00 pm CT Sunday night time slot, it attracts younger viewers and parents who still think of Disney as wholesome. Of course, 1MM knows that Disney has not been wholesome.

TAKE ACTION: Please use the information we have provided to contact TJ Maxx and ask that they pull their financial support from “Once Upon a Time.” Blessings, Monica Cole, Director, OneMillionMoms.com.