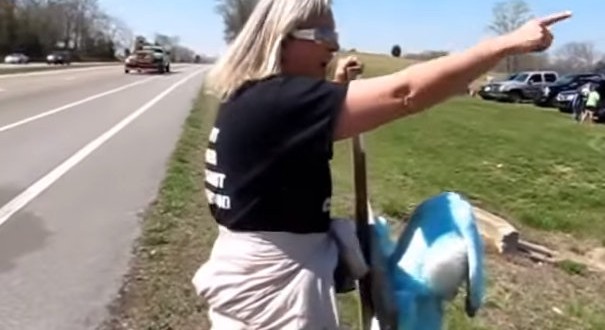 When we last heard from nutbag Christian activist Christine Weick she was screaming at the father of pop star Katy Perry because his daughter is controlled by Satan. Last weekend Weick decided to scream at kids attending a church-sponsored Easter egg hunt on a Tennessee hill, all while brandishing a stuffed Easter bunny on a cross. For real. Watch below.

Weick is perhaps best known for her campaign against Monster Energy Drink, which was totally created by Satan himself. His mark is RIGHT ON THE CAN, people! And then there was last year when she showed up outside the Supreme Court building to scream about gay marriage. And the time she rushed the microphone at a Muslim prayer service to scream about Jesus. Weick has claimed to be homeless and living out of her car because her family wants nothing to do with her, but she sure gets around the country with apparent ease.