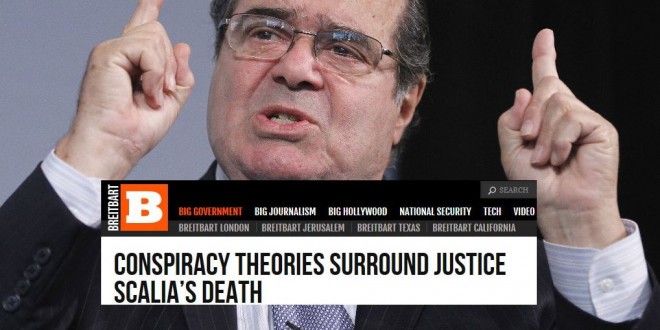 Breitbart is egging on the “Scalia was murdered” conspiracies sweeping Teabagistan. They write:

While Scalia was pronounced dead “of natural causes”–or, alternatively, of a heart attack–no qualified official had actually examined his body, and there was no autopsy performed, apparently in deference to the wishes of his family.

John Poindexter, the owner of the ranch, provided more bait for speculation with an awkward description of how Scalia was found: “We discovered the judge in bed, a pillow over his head. His bed clothes were unwrinkled.”

Presidio County Judge Cinderella Guevara said that there had been “no foul play,” according to the Washington Post–but she had “pronounced Scalia dead of natural causes without seeing the body — which is permissible under Texas law — and without ordering an autopsy.” It had taken “hours” for authorities to find the judge at all.

The above-linked article wonders why President Obama would have “waited past so many big decisions” to have Scalia killed.