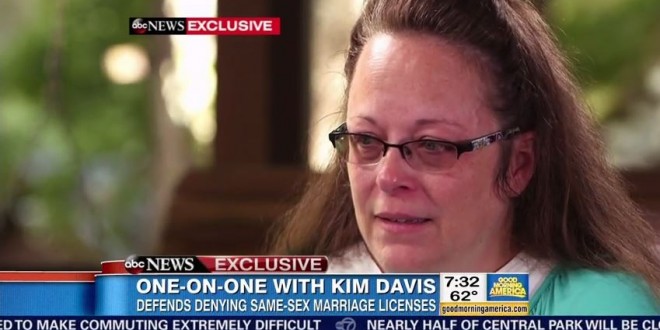 Kim Davis: I’m Ready To Go Back To Jail [VIDEO]

Good Morning America this morning aired their interview with an always sobbing Kim Davis, who says that she’s prepared to return to jail and that God is the only authority she obeys. Davis added that the licenses issued since her release from jail “are not valid in God’s eyes.” Oh, and she TOTALLY has gay friends. Via ABC News:

“What people say about me does not define who I am. That’s everybody’s opinion and that’s everybody’s right,” Davis told ABC News. Davis said she’s been “called Hitler, I’ve been called [a] hypocrite, I’ve been called a homophobe.” “I’ve been called things and names that I didn’t even say when I was in the world. Those names don’t hurt me,” Davis said. “What probably hurt me the worst is when someone tells me that my God does not love me or that my God is not happy with me, that I am a hypocrite of a Christian.” Davis’ attorney, Mathew Staver, was also present for the interview.

Previous REPORT: Price-Gouging Pharma CEO Has Been Accused Of Hacking & Harassing Rival’s Family
Next Huckabee: Inviting Gays To Meet The Pope Is Like Inviting Alcoholics To An Open Bar [VIDEO]