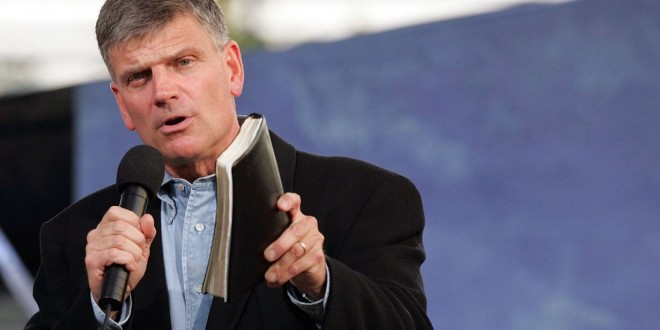 “I’m thankful and proud that Americans are standing up against the evil being forced on us. Our religious rights and freedoms are being trampled on. Clerk of Court Kim Davis in Rowan County, Kentucky, refused to issue marriage licenses for gay couples and defied the U.S. Supreme Court ruling. She said, ‘To issue a marriage license which conflicts with God’s definition of marriage, with my name affixed to the certificate, would violate my conscience…For me it is a decision of obedience…It’s a matter of religious liberty.’ Kim has [ALLEGEDLY] received death threats from people she doesn’t even know, and she has to appear in court on Thursday over a motion to hold her in contempt. We need more Americans who are willing to take a stand for religious freedoms and biblical values in our communities. If we don’t, we won’t even recognize the America that our children and our grandchildren will be left with. Pray for Kim Davis and for our nation today.” – Franklin Graham, taking a break from his $880,000 annual salary to post on Facebook.