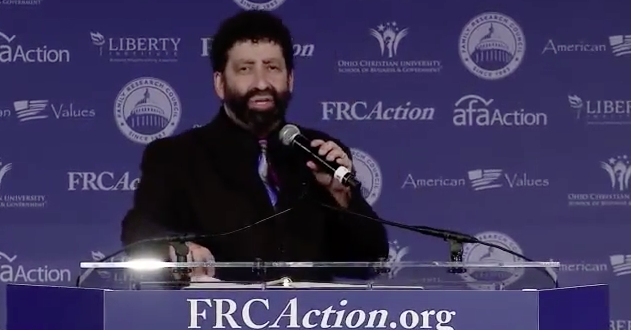 Of all the crazy people that spoke at FRC’s Values Voter Summit this weekend, End Times “messianic” Rabbit Jonathan Cahn REALLY takes the loony cake. Watch as the crowd boos when Cahn flashes a photo of the White House bathed in rainbow lights, then tells them that SCOTUS and Obama have “desecrated” the rainbow, therefore God is going to kill the fuck out of everybody. From World Net Daily:

The rabbi said the Supreme Court struck down God’s own order when it declared same-sex marriage a constitutional right in June. Cahn also condemned the LGBT movement for using the rainbow as its symbol when the rainbow was originally a sign of God’s promise to Noah. “To take that sign and use it to celebrate the first desecration is a second desecration,” he said. He added that when the White House lit up in rainbow colors on the night of the court’s gay marriage ruling, that was a third desecration. Cahn sees it as an arrogant declaration that America is choosing to live by its own ways, not God’s ways. And if a nation judges the ways of God, he asked, how can God not judge that nation?