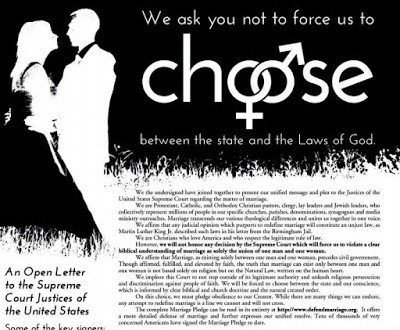 Hate Groups Publish Full-Page Message To SCOTUS In The Washington Post: We Won’t Honor Your Ruling On Marriage

A coalition of hate groups and Christian pastors calling themselves Defend Marriage has published a full-page message to SCOTUS in the Washington Post. Among the signers at the bottom of the ad are Mat Staver, Elaine Donnelly, the Benham brothers, Alveda King, Jim Garlow, John Hagee, E.W. Jackson, Don Wildmon, Dave Welch, Robert Jeffress, and Penny Nance. From the text:

We affirm that any judicial opinion which purports to redefine marriage will constitute an unjust law, as Martin Luther King Jr. described such laws in his letter from the Birmingham Jail. We are Christians who love America and who respect the legitimate rule of law. However, we will not honor any decision by the Supreme Court which will force us to violate a clear biblical understanding of marriage as solely the union of one man and one woman. We affirm that Marriage, as existing solely between one man and one woman, precedes civil government. Though affirmed, fulfilled, and elevated by faith, the truth that marriage can exist only between one man and one woman is not based solely on religion but on the Natural Law, written on the human heart.

Bolding is theirs. (Tipped by JMG reader Jim)