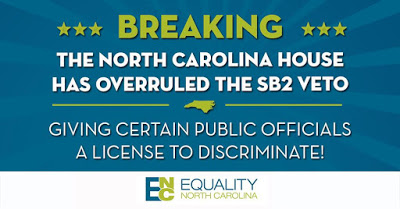 The override passed by a mere three votes.

UPDATE: From the Campaign For Southern Equality.

“Senate Bill 2 is unconstitutional, and will undoubtedly be challenged in court. This bill, which will now become law, is discriminatory and treats gay and lesbian couples as second class citizens. We are more determined than ever to achieve full equality for LGBT people in North Carolina and to ensure that LGBT youth know that they are not alone,” says Rev. Jasmine Beach-Ferrara, executive director of the Campaign for Southern Equality. “This law is nothing more than state sanctioned discrimination. It is a terribly misguided attempt to rewrite what equal protection under the law means. Equality and fairness are not principles that are decided on a case-by-case basis, dependent upon who happens to be working the counter on a particular day. Neither the United States Constitution nor the North Carolina Constitution permit any such thing. It is terribly unfortunate that this many elected officials don’t understand that,” says Jake Sussman of Charlotte-based Tin Fulton Walker & Owen and lead counsel in General Synod of the UCC v. Reisinger, the lawsuit that struck down Amendment One last October.