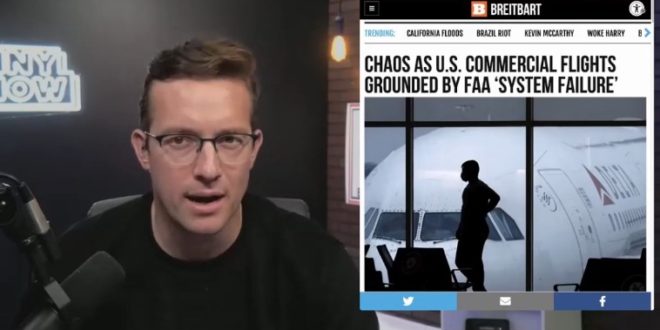 “Someone who does no work at all and is utterly undeserving of his position and probably should be in line for impeachment with Secretary Mayorkas is Pete Buttigieg. Pete Buttigieg, his Transportation Secretary position, well, not going great. All flights have been grounded in America this morning, even though it’s, like, pretty nice weather – it’s, like, beautiful morning here in Florida.

“Why? Well, because the FAA had a system failure. Sounds awesome. Definitely a Chinese hack, by the way. Probably the same Chinese agents that paid for Google documents inside of the Biden Center. Definitely put malware inside of the FAA system.” – Newsmax host and Tucker Carlson wannabe Benny Johnson, who was fired from three previous gigs for plagiarism.

Johnson last appeared on JMG when he called Britney Griner a “drug addict wokester.” Before that, we heard from him when he declared that New York AG Letitia James hates Donald Trump “for being white.”

Every plane in America is currently grounded due to a system error.

This is what happens when you hire clueless liberals for jobs they aren’t qualified to do.