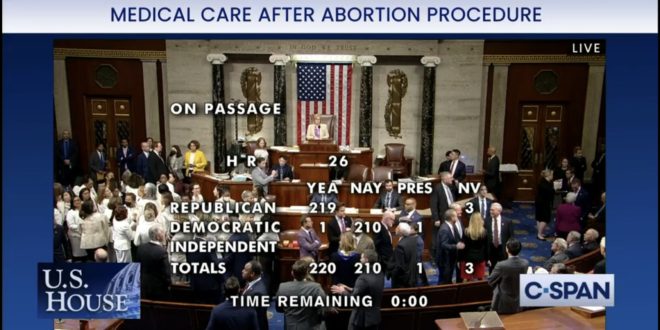 House Republicans on Wednesday used their new majority to push through a largely symbolic bill that would require health care providers to provide care to infants born after an attempted abortion. Health providers are already required under law to act to provide medical services to any infant born at any gestational age. The House bill also penalizes the “intentional killing of a born-alive child,” which is already illegal. The measure, which passed 220-210, has virtually no chance of passing the Democratic-controlled Senate.

“If a baby is born alive, outside the womb, in some states, they actually are allowing that baby to be killed and calling it abortion.” pic.twitter.com/CCgCBSDJHK

This bill is absurd for so many reasons, number one, it is obviously ALREADY illegal to kill a baby. The only new action this bill takes is to threaten jail time for health care workers.

There should be no question, any child born alive should receive the care they need to survive.

Rep. Henry Cuellar (D-TX) was the only Democrat voting with Republicans in support of the measure. Rep. Vicente González (D-TX) voted present.