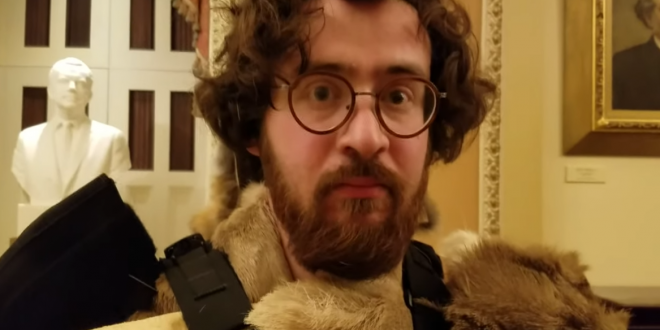 The son of a New York City judge who referred to himself as a “caveman” eager to protest Donald Trump’s presidential election loss and pleaded guilty to charges he stormed the U.S. Capitol during the Jan. 6, 2021 insurrection, was sentenced Friday to eight months in prison, according to federal prosecutors.

Aaron Mostofsky was seen inside the Capitol wearing a fur costume and a police bulletproof vest that he was accused of stealing during the mayhem. He also gave a video interview inside the building, telling the New York Post he was there “to express my opinion as a free American that this election was stolen.”

Aaron Mostofsky, 35, told the judge that he is ashamed of his actions. “When it started getting chaotic to a point that I had never experienced, I started to make bad decisions,” he said, describing it as similar to a “war” scene.

For Boasberg, it seemed that Mostofsky got wrapped up in a “fantasy” of a stolen election.

“You dressed up as a caveman and acted a role like a fantasy game,” the judge said, adding that Mostofsky’s apparent belief that Donald Trump won in New York reached new heights of conspiracy theorizing.

BREAKING: Aaron Mostofsky, 35, son of a Brooklyn Supreme Court Judge was sentenced to 8-months in prison for his felony faux pas conviction. pic.twitter.com/tb5uKYfjtZ