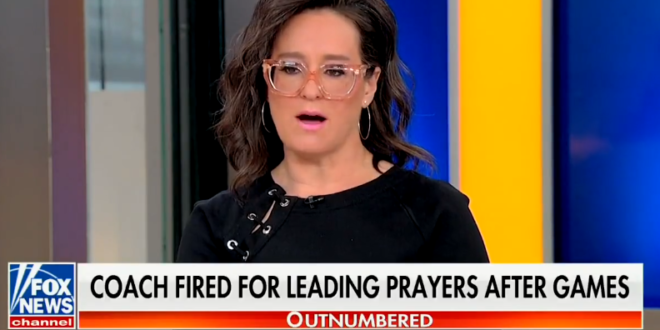 A host on Fox News on Monday during a discussion on a school prayer case before the Supreme Court suggested local governments across the country should consider doing away with public schools, saying “maybe we should not have the government involved in education at all.”

Lisa Kennedy, the host, offered the remarks on Monday’s “Outnumbered” during a discussion about a case involving a high school football coach who was reprimanded for holding postgame prayers on the football field’s 50-yard line.

“I’ll tell you why I say that,” Kennedy responded. “It’s because the two most powerful teachers unions in the country are opposed to Coach Kennedy. They are using their heft and their influence to make sure that he loses this case.”

Fox News and Christian hate groups continue to claim the coach was fired. He was not.

“A great time in our country’s history where we rethink whether or not we have public schools. Maybe we should not have the government involved in education at all.” pic.twitter.com/BCR8w1edes