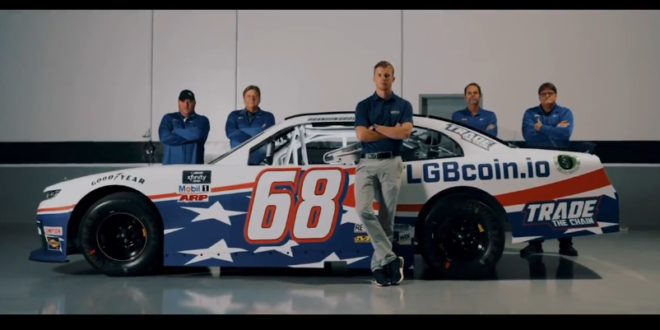 A partnership between NASCAR driver Brandon Brown and a cryptocurrency coin named after the “Lets go Brandon” meme, a coded vulgar insult of President Biden, appeared to be in limbo on the same day the deal was announced.

Max Marcucci, a PR strategist who represents the racecar driver and Brandonbilt Motorsports, said NASCAR provided written approval of the car’s paint scheme and sponsorship for the upcoming season of the Xfinity Series, NASCAR’s second tier.

But after Brown’s team announced the agreement on Thursday, with a news release along with video and photos of the car, NASCAR informed Brown’s team it still is reviewing the details, according to Marcucci.

Read the full article. Brown had previously claimed that he wasn’t “political” and wanted nothing to do with the anti-Biden meme that arose after his interview with a reporter who misheard the chanting of a pro-Trump crowd. But then the cryptocurrency outfit offered him a pile of money to cover his car with their logo and URL.

An LGBcoin rep tells @USAToday that NASCAR originally approved the deal under the stipulation that only the LGB acronym would be used, while an external PR strategist hired by Brandonbilt says NASCAR had “provided written approval for the sponsorship deal.”https://t.co/zMfwzGrToW

I’m excited to welcome @LGBcoin_io aboard my No. 68 Chevrolet Camaro as our 2022 NASCAR Xfinity Series full season primary partner!