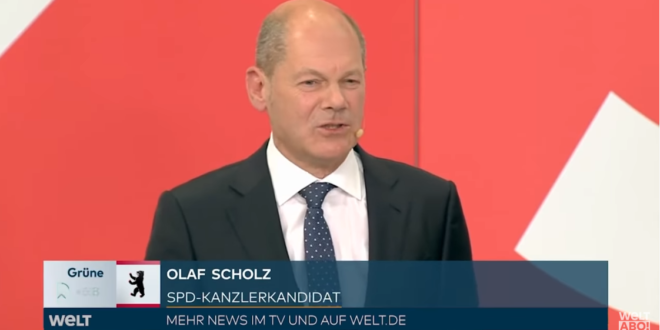 Police in the German state of Saxony raided several locations in Dresden on Wednesday after online threats were made against state premier Michael Kretschmer and other members of the state government.

In Dresden, police searched five properties, and another place was being searched in the nearby town of Heidenau. Police have reason to believe the suspects were preparing to carry out violent acts.

Germany’s new chancellor Olaf Scholz [photo] said the country would “not allow a tiny minority of uninhibited extremists to try to impose its will on the whole of society.”

Members of the group, called ‘Dresden Offlinevernetzung’, or Dresden offline network, had suggested in messages on Telegram that they might be in possession of firearms and crossbows, Saxony police said on Twitter.

The former East German states, including Saxony, are particularly fertile territory for the new fringe movement. Public protests against the restrictions are almost daily and sometimes result in violence.

The Telegram messaging app at the centre of the police investigation has itself come under fire from the government.

“German chancellor Olaf Scholz has warned of the threat posed by extreme anti-vaccine campaigners, hours after police launched raids over a suspected violent “anti-vax” plot against the leader of the state of Saxony”.https://t.co/jPf7v2eR3d

Police in eastern Germany have carried out raids as part of an investigation into alleged death threats made on #Telegram against Saxony’s regional leader @MPKretschmer by opponents of #coronavirus restrictions and vaccinationshttps://t.co/CbHnupqpcv

Previous NYPD Gets Its First-Ever Female Commissioner [VIDEO]
Next Carlson: The Capitol Rioters Were “Correct” [VIDEO]