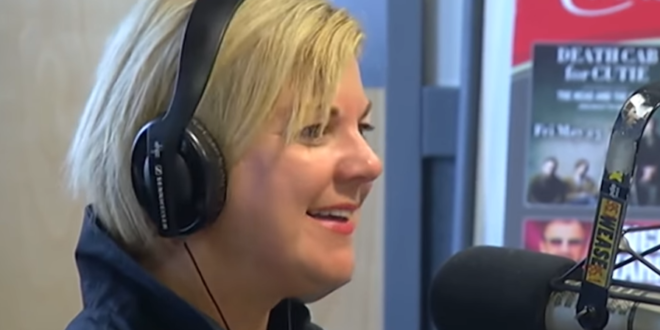 A former Rochester radio host is under investigation after boasting on social media that she used a fake vaccination card to gain entry into Sunday’s Buffalo Bills vs. Miami Dolphins game at Highmark Stadium.

The Bills require all fans ages 12 and older to provide proof of vaccination to be permitted entry to games, with Sunday’s contest the first time that proof of full vaccination was required. According to Erie County Department of Health officials Monday, more than 250 fans were turned away Sunday for lacking proof of vaccination.

During the game, Kimberly Ray, former host of the Kimberly and Beck radio in Rochester, tweeted about using a fake vaccination card to gain entry into the stadium, posting a picture of herself in the stands and saying “Here we are. Didn’t even look at my fake card lol.”

From a 2020 Democrat & Chronicle report:

Two popular Rochester radio show hosts have been fired after making racist comments during a live broadcast on Tuesday.

During a discussion focused on the attack of a local couple following the recent Black Lives Matter protest in downtown Rochester, Kimberly Ray, of the local radio duo Kimberly and Beck, referred to the n-word three times during the segment, asking whether the attackers were acting “n-word-ish” and “n-word-ly.”

Ray did not actually use the n-word. “OK, let me ask you a question. Were they acting n-word-ish?” she said during the broadcast, which airs from 2 to 7 p.m. weekdays on Radio 95.1, an FM station owned by iHeartMedia.

Following offensive and inaccurate anti-transgender comments from 98.9 ‘Breakfast Buzz’ hosts Kimberly Ray and Berry Beck regarding a recent local ordinance granting transgender healthcare to Rochester city employees and their families, the station released a brief statement saying that the two hosts have been suspended indefinitely.

“As a result of Kimberly and Beck’s hateful comments against the transgender community we have suspended them indefinitely,” said Sue Munn, Vice President and General Manager of Entercom Rochester, which owns the station.

The segment that led to the suspension involved Kimberly and Beck referring to transgender people as “nut jobs” and saying, “The dude can look like a lady and the city is going to pay for it!”

Kimberly Ray posted a picture of herself in the stands and saying “Here we are. Didn’t even look at my fake card lol.”https://t.co/YbAkym8Ksi