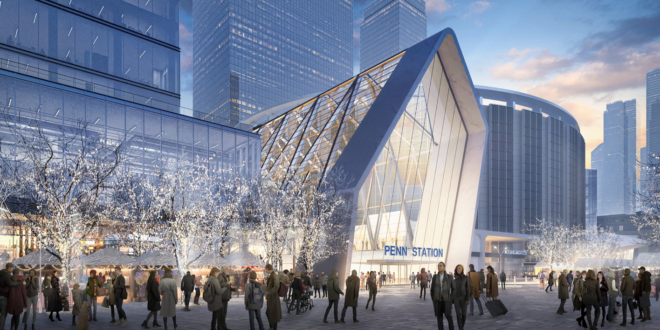 Governor Kathy Hochul plans to forge forward with a redesign of Penn Station and the surrounding neighborhood, but will put her own spin on the project first proposed by her predecessor Andrew Cuomo.

“This area is is the beating heart of our city,” Hochul said during a press conference Wednesday, noting it’s the busiest transit hub in North America. She called her plan a way to make “a Penn Station worthy of New Yorkers.”

Despite the new focus, the administration is still calculating how much the entire development would cost — a reimagined Penn Station could be $7 billion, the officials said — as well as firming up how it would be funded and who would be responsible for funding it.

Aides to Ms. Hochul said that she wanted the project to benefit New Yorkers first and foremost, directing state agencies to prioritize the new Penn Station and new public amenities.

“New Yorkers do not deserve what they have been subjected to for decades at Penn Station,’’ Ms. Hochul said in a statement. “This plan puts New Yorkers first, delivering the rider-focused transit experience and great neighborhood they deserve. Investing in Penn Station means investing in New York’s future as we build back from Covid.”

In the press conference below, Hochul argues that a NYC landmark should not be named for a “neighboring state.”

Travelers are sometimes confused that Penn Station is on the same line as Newark Penn Station. Seven other cities, including Cincinnati and Baltimore have a Penn Station.

It’s time for a Penn Station that meets the needs of New Yorkers.

And we’ll make it easier to get around, adding 18 more escalators and stairs & 11 new elevators. 2/

The area around Penn Station is a community where people live, work and play.⁰ After engaging with the community, we are announcing a new path forward. 3/ pic.twitter.com/KiVCUjjbbm

This plan is about supporting our workforce, too. Our plan will create more than 50,000 good-paying construction jobs. 5/

A new underground pedestrian concourse will connect Penn all the way to Herald Square, and north to 34th Street.

We will also require every new building to include new transit entrances, relieving congestion and making catching your train easier & more pleasant. 6/ pic.twitter.com/p6RIcNEXGx

We’re putting pedestrians and cyclists front and center. On top of 8 acres of new public space, we will widen sidewalks, build new protected bike lanes & bike parking and make other improvements to the streetscape that improve safety. 8/ pic.twitter.com/wTe9p8ExfI

The era of neglecting commuters and the community around Penn Station is over. Our plan transforms the crossroads of New York, rights the wrongs of the past, & is forward-looking.

Together we will create a more livable city for New Yorkers now and for decades to come. 10/10 pic.twitter.com/Kkz7CxmJ8w

🚨🚨Hochul plans to rename Penn Station…! But won’t say what it will be yet. Says it should be named after a New Yorker.

Hochul wants to rename Penn Station too. After a New Yorker. Folks… pic.twitter.com/lvI92LXv1D