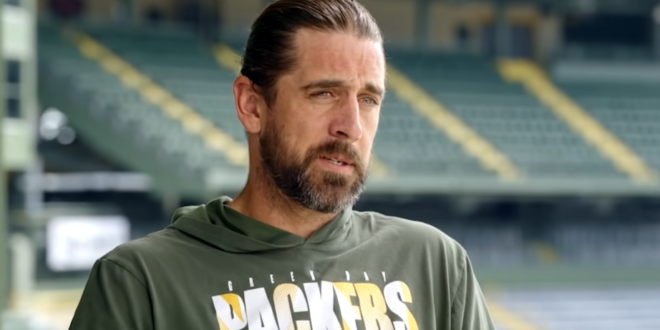 Anti-Vax NFL QB Whines The “Woke Mob” Is After Him

Following two days of being chastised for his decision to not only skip the Covid vaccine, but deceive people into believing he was inoculated, Aaron Rodgers finally spoke out Friday afternoon.

The quarterback joined Pat McAfee on his SiriusXM Radio show, to blast the “woke mob” for attacking him and correct what he believes are lies being spread.

“I realize I’m in the crosshairs of the woke mob right now,” Rodgers said on The Pat McAfee Show. “So before my final nail gets put in my cancel culture casket I think I’d like to set the record straight on so many of the blatant lies that are out there about myself right now.”

Aaron Rodgers says after contracting COVID this week … he consulted with Joe Rogan and decided to take ivermectin to fight off the virus. https://t.co/Zk5uivUAiG

“For me, it involved a lot of study in the offseason”

Aaron Rodgers confirms that he did his own research

I don’t particularly care other than to weigh in on the debate on whether or not he lied. He lied. This is what a lie is. 😂 #AaronRodgers pic.twitter.com/cooTPGs4Ry

“I realize I’m in the crosshairs of the woke mob right now so before my final nail gets put in my cancel culture casket, I’d like to set the record straight.”

have we considered the possibility that Aaron rodgers is nicki minajs cousins friend https://t.co/QSTeFXXosp

everyone is freaking out about this aaron rodgers interview but this is all said all of the time on fox and through conservative media, like every point hes making is said on the news every single day lots and lots of times https://t.co/jWcTbOJ6iP

It would be impossible to draw up a more stereotypical antivaxxer argument than the one being outlined by Aaron Rodgers today.

For someone who believes he’s a “critical thinker,” he sounds identical to every old lady in my Ivermectin Facebook groups and Q Telegram channels.

JAKE FROM STATE FARM: Hey Aaron, did you know you can save tons of money on your auto insurance by switching to State Farm

Aaron Rodgers just said he presented his research to the NFL. “They thought I was a quack.”

Cover the NFL for multiple decades and at least once a year you’ll think “this is the weirdest story we’ll ever see” and then Aaron Rodgers comes along and says he’s getting pandemic-related medical advice from Joe Rogan.

This Aaron Rodgers speech is the entire board of anti-vaxxer Bingo: