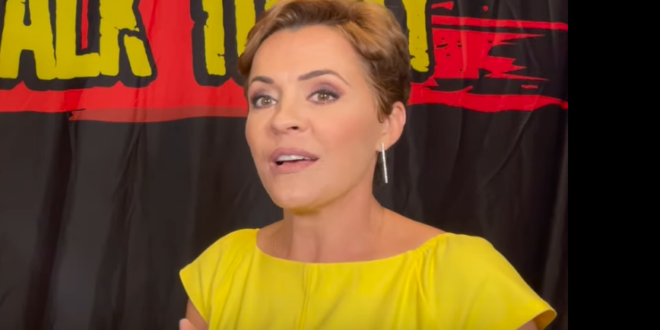 Kari Lake, the Arizona gubernatorial candidate recently endorsed by former President Donald Trump, has embraced fringe far-right figures in her campaign events, including publicly thanking a Nazi sympathizer for his support and appearing with figures linked to the QAnon conspiracy.

Lake posed for a photo and video with far-right personalities Ethan Schmidt-Crockett, the founder of the AntiMaskersClub, who harassed a store specializing in wigs for cancer patients this summer because it required customers to wear masks, and Greyson Arnold, a Nazi sympathizer who has a history of making White nationalist, racist, antisemitic and pro-Nazi statements, including once calling Adolf Hitler “a complicated historical figure which many people misunderstand.”

“Anti-maskers club here with Kari Lake,” said Schmidt-Crockett alongside Lake and Arnold in the video. “America First,” they each said. After Arnold posted a photo of the trio on Twitter, Lake replied, “It was a pleasure to meet you, too.”

Read the full article. Last month Lake had dinner with Ron Watkins, the alleged Q himself of QAnon. Watkins is running for Congress.

AZ gubernatorial candidate Kari Lake, recently endorsed by Trump, has embraced fringe far-right figures in her campaign events, including publicly thanking a Nazi sympathizer for his support and appearing with figures linked to QAnon, a KFile review finds. https://t.co/JDJ64Pdl2N

This is who Trump endorsed. pic.twitter.com/mnTFqdjaAZ