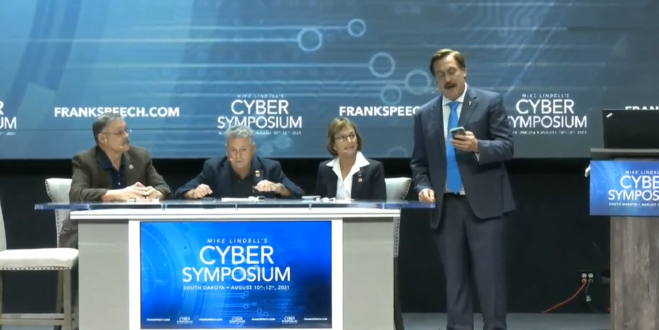 At his so-called cyber symposium, MyPillow CEO Mike Lindell said that a writer for far right website Gateway Pundit might be a CIA plant trying to undermine his conference … or something? But they are looking into it for sure.

Lindell was apparently unhappy about a post at the conspiracy blog that focused on the news of supposed cyber security expert Josh Merritt that broke earlier Thursday.

The Gateway blog, under the byline Larry Johnson, wrote about it, saying: “One of Mike Lindell’s cyber experts bailed on the China hack theory earlier this week and spoke with the media. Why now? Why would he wait until the week of the symposium to bail?”

Read the full article. Longtime JMG readers may recall that in 2008 Johnson claimed to have video of Michelle Obama ranting about “whitey” at a Chicago church. Obviously, no such video was ever produced.

WATCH: Mike Lindell Makes Bonkers Accusation — Even For Him — Live On Stage https://t.co/CA20wyQdJ1

Lindell just walked on stage to accuse a writer for GATEWAY PUNDIT of being a CIA plant for reporting that one of Lindell’s own experts had acknowledged they don’t actually have any evidence… a story Lindell appears somehow unaware broke yesterday evening.

A “reporter” from the far-right outlet The Gateway Pundit, after being aggressive towards a fellow reporter, surreptitiously recording my laptop, and shoving a camera in my face – was frog-marched out of the Mike Lindell gathering this afternoon.

Mike Lindell rushed the stage to push back against a Gateway Pundit article calling out his fake data and claims the source, a “cyber expert” Mike himself hired, is CIA pic.twitter.com/SKCquBZWvN