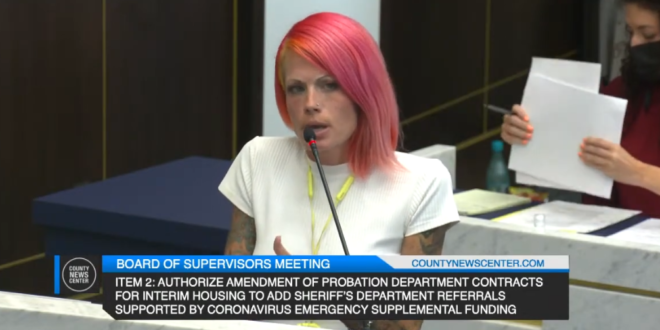 Anti-Vax Extremists Rage At San Diego County Board: “We’re Coming For Every Fucking One Of You” [VIDEO]

At least 120 people addressed the San Diego County Board of Supervisors during a contentious 4 1/2-hour public hearing Tuesday on the county’s efforts to combat the coronavirus pandemic.

One man, who said he was part of the crew for the discredited film “Plandemic” said he was filming the board members for a sequel. Several speakers called for board members to be arrested or resign or screamed at them. A few speakers also called on county public health officer Dr. Wilma Wooten to resign.

Audra Morgan, who has spoken against the county’s COVID policies at previous meetings, accused supervisors of violating their oaths. “We’re coming after every single fucking one of you,” she told the board.

A man who identified himself as Matt Baker invoked both “the wind of time”—he was whistling into the microphone—and the Nuremberg Codes in angry arguments that left him red-faced.

Baker said to the board of supervisors, “You are about to open a pit of hell. You do not get a vaccine passport put on us. You know as the population who’s in control, you know as politicians—once you get a power, you never relinquish it.

“Do you think that the four feet of marble that holds you above in this chamber will help you from the fate of humanity which you are unleashing? No! It won’t! Your children and your children’s children will be subjugated! They will be asked, ‘How many vaccines have you had? Have you been a good little Nazi? Heil Fauci!”

A woman at the meeting stood up and immediately started brandishing her Bible, which she claimed that board members couldn’t touch without their hands catching fire. Then she started attacking any plans for mandatory vaccinations. “You want to vaccinate everybody or make them get a test!” she said.

“All of the things that you’re doing is totally fraudulent. Your days are numbered… I suggest you resign! What you’re doing is crimes against humanity! Every single one of you is engaging with that! That is treason when you go against your oath!”

KUSI News (below) is a right wing outlet.

“I actually work for a big corporation, and my CEO has a message for you, he’s not going to do it. Go pound sand @NathanFletcher.”

Shaun Frederickson returns to speak in front of @SanDiegoCounty Board of Supervisors after his last speech gained millions of views.

“We’re here to inform you the people have spoken, COVID is over. The numbers you stated are propaganda.”

“We are done, the consent of the governed is removed. We will not comply. We do not consent. @Nathan_Fletcher you are on notice. We will constitutionally remove all petty tyrants beginning now.”

“I came here today, because if I didn’t, what kind of mother would I be if I couldn’t stand up for my children?”

COVID denier at San Diego County meeting accuses Supervisors of “crimes against humanity” and brought a Bible with her but said they would burn if they touch it. “We’re coming for every single f*cking one of you,” she said. pic.twitter.com/cYiJK2jlrp