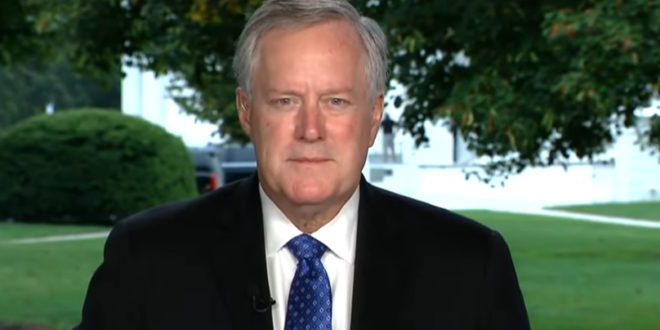 A new book is shedding light on former President Trump’s battle with COVID-19 last fall, alleging Trump’s condition was so severe some of his aides feared he may not make it out of the hospital.

The Washington Post has published excerpts from the book “Nightmare Scenario: Inside the Trump Administration’s Response to the Pandemic That Changed History,” authored by Post reporters Damian Paletta and Yasmeen Abutaleb.

Hours after announcing he tested positive for COVID-19 via Twitter, the president’s fever spiked and his blood oxygen level fell below 94 percent, even dipping into the 80s, according to the book. The book, citing two people close to Meadows, claims Meadows was “consumed with fear that Trump might die.”

Trump was in the highest-risk category for severe disease from covid-19 — at 74, he rarely exercised and was considered medically obese. For months, the president had taunted and dodged the virus, flouting safety protocols by holding big rallies and packing the White House with maskless guests. But just one month before the election, the virus that had already killed more than 200,000 Americans had sickened the most powerful person on the planet.

Trump’s medical advisers hoped his bout with the coronavirus, which was far more serious than acknowledged at the time, would inspire him to take the virus seriously. Perhaps now, they thought, he would encourage Americans to wear masks and put his health and medical officials front and center in the response. Instead, Trump emerged from the experience triumphant and ever more defiant.

Portrait of a sociopath: “He was still probably contagious, standing there for all the world to see. He … then strode into the White House, passing staffers on his way and failing to protect them from the virus particles emitted from his nose and mouth.”https://t.co/1uvY0qP09H

“He wasn’t worried about others getting sick, but he did fret about his own vulnerability and complained to his staff afterward. Why were they letting people get so close to him?” https://t.co/yKH6tjjwnL

According to this report, Trump nearly died, was saved by a rare, experimental drug that pretty much nobody else got access to, and rather than being humbled, he doubled-down on a reckless approach that continued to cause hundreds of thousands to die. https://t.co/iXFFEtbxMr