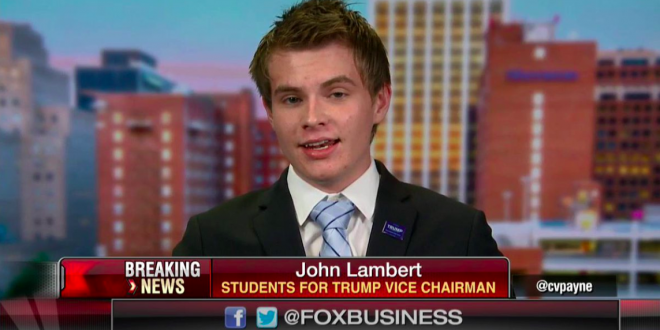 Students For Trump Founder Sentenced To 13 Months In Prison, Posed As Lawyer With An Ivy League Education

A judge slammed the founder of Students for Trump as a “cold blooded fraudster” before sentencing him to 13 months in prison for posing as a lawyer. John Lambert, 25, pretended to be as Eric Pope, of the Manhattan-based firm Pope & Dunn.

He falsely claimed to be a graduate of NYU Law School with a finance degree from University of Pennsylvania and 15 years of experience in corporate and patent law.

Lambert grabbed headlines during the 2016 presidential campaign for the group he founded with classmate Ryan Fournier at Campbell University in Buies Creek, N.C., in 2015. Their Students for Trump group ran a Twitter account featuring photos of bikini-clad women and pics of themselves at political events.

Read the full article. Lambert told the court that he no longer supports Trump. His sentence comes, in part, because he’s reportedly not paid back his victims. During his trial, it was revealed that Lambert was “obsessed” with the movie, The Wolf Of Wall Street. His alleged co-conspirator, Ryan Fournier, cooperated with prosecutors. Fournier has nearly one million Twitter followers.

Students for Trump founder sentenced for posing as lawyer. What does Trump get for posing as a President though? https://t.co/jDNjyjSXBa

Democrats are the party of lawlessness and destruction – they want to disarm you while empowering ruthless mobs like ANTIFAhttps://t.co/K6CdppeqH1

Previous Trainer Admits Using Banned Substance On Horse
Next With Trump Gone, Fox To Ease Off On Hard News