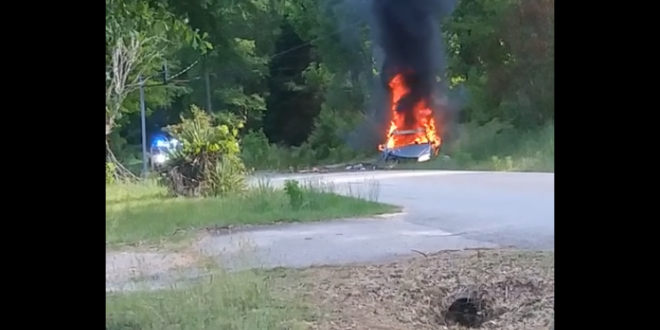 A woman hoarding gas caught on fire following a car accident Thursday night in Pickens County, according to Chief Deputy Chad Brooks. A deputy in a marked patrol unit, saw a Pontiac G6 traveling on Jameson Road in Pickens and determined that the vehicle was displaying a South Carolina license plate that had been reported stolen, Brooks said. The driver of the Pontiac accelerated the vehicle in an attempt to elude law enforcement. The driver lost control of the vehicle, veered off the roadway, and completely flipped the vehicle.

Authorities said “multiple explosions” could be heard coming from inside the car. When the driver, identified as Jessica Gale Patterson, got out of the car, she was on fire. “The deputy pushed Ms. Patterson to the ground in order to put out the flames,” the sheriff’s office said. Patterson, 28, was taken to a hospital. Her condition was unknown Friday. The aftermath of the wreck was captured on a video that was shared on Facebook. It shows large flames and heavy black smoke billowing from the car.

A woman, who deputies say was hoarding fuel in her trunk, caught on fire after a crash in Pickens County on Thursday night.