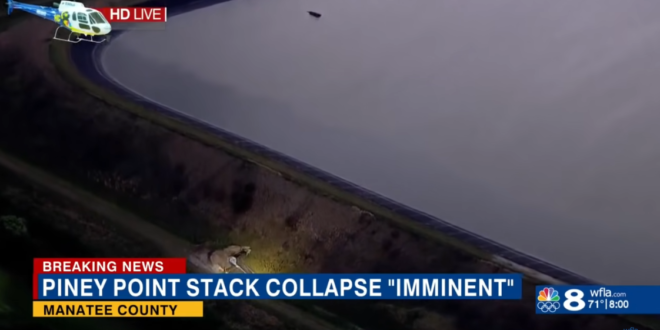 Officials in Florida expanded a mandatory evacuation area near a large reservoir of wastewater Saturday because of a significant leak that authorities fear could lead to floods and a collapse of a system with radioactive material.

The original evacuation zone around the breached Piney Point reservoir has expanded a half-mile west and one mile southwest to Moccasin Wallow Road. Florida Gov. Ron DeSantis declared a state of emergency in Manatee County in response to the Piney Point incident.

The Florida Department of Environmental Protection says a break was detected Friday in one of the walls of a 77-acre pond, holding millions of water containing phosphorus and nitrogen from an old phosphate plant.

Between two and three million gallons of saltwater continue to flow out of the pond every day, but the chances are increasing that a large section of the pond will wash away, causing an uncontrolled release that would send as much as 380 million gallons of process water rushing out, according to Manatee County’s website.

Officials said the leak in the containment wall at the reservoir, which began last week, could lead to structural collapse at any moment. The Piney Point facility is located approximately 40 miles south of Tampa, which has approximately 400,000 residents.

Due to a possible breach of mixed saltwater from the south reservoir at the Piney Point facility, I have declared a State of Emergency for Manatee County to ensure resources are allocated for necessary response & recovery.

I have requested that @GovRonDeSantis convene an emergency meeting of the Florida Cabinet for a briefing by @FLDEPNews Secretary @NoahValenstein on the imminent #PineyPoint disaster.

🚨 If you are in the area, follow directions from local officials and evacuate NOW if ordered. pic.twitter.com/3UUz4VikO5

This is what’s going to collapse.