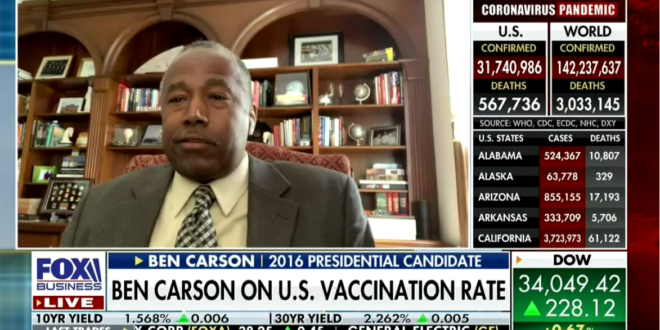 Former Secretary of Housing and Urban Development Ben Carson pushed for the use of hydroxychloroquine in Covid-19 patients — earning some skepticism from Fox Business anchor Neil Cavuto. Yes, Carson is still pushing hydroxychloroquine as a treatment for Covid-19, even as legitimate vaccines are clearly working to fight the virus.

Cavuto quickly refuted Carson’s claim on the drug — citing studies into its effectiveness. “Medical experts have looked at that, doctor, as you know, and poo-pooed that connection,” Cavuto pushed back before trying to shift the focus back to the coronavirus vaccine. The anchor, however, failed to deter the doctor.

Read the full article. Watch the clip at the bottom. Carson, you may recall, reported being “desperately ill” with COVID in November, later saying he recovered after receiving the monoclonal antibody therapy that Trump had gotten and then “cleared” Carson to receive as well.

Ben Carson Pushes Hydroxychloroquine to a Skeptical Neil Cavuto on Fox News: ‘The Evidence is There’ https://t.co/I4egHytVQ0

Ben Carson thinks racial equality is racism, which explains how he got a job in the Trump administration. pic.twitter.com/dJcRIShmH6

This new Mike Lindell TV channel is riveting, with great production. They got Ben Carson nice and centered on camera. He just spent 5 minutes looking down at his phone bored during a long Mike Flynn rant, and the audio is top notch! pic.twitter.com/yHtPqHvdQb