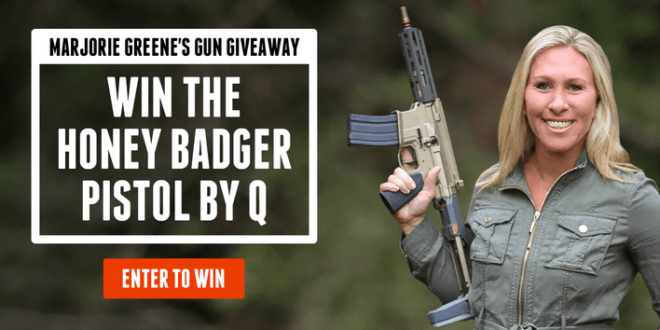 The congresswoman representing Georgia’s 14th Congressional District is holding a gun giveaway for an AR-15 called the “Honey Badger,” a weapon that the Bureau of Alcohol, Tobacco, Firearms and Explosives attempted to regulate after deeming it a “short-barreled rifle.”

“Win the gun that TRIGGERS the Fake News Media and Democrats all across the country,” Greene wrote on her campaign website page dedicated to the giveaway. “And it’s the same type of gun the hate-America gun-grabbers in DC would love to BAN if they ever get the votes.”

Greene’s giveaway comes in the wake of President Joe Biden calling on Congress to pass gun reform legislation, including a ban on assault weapons.

Read the full article. Greene claims that the gun is valued at $2680. Registering to win also gets you on her money beg list, of course. Nevertheless, I’m registering just in the hopes of trolling her back if I should win.

In response to President Biden calling on Congress to pass gun reform legislation, Marjorie Taylor Greene is holding a gun giveaway for an AR-15 called the “Honey Badger”https://t.co/p2HgwuhaWh