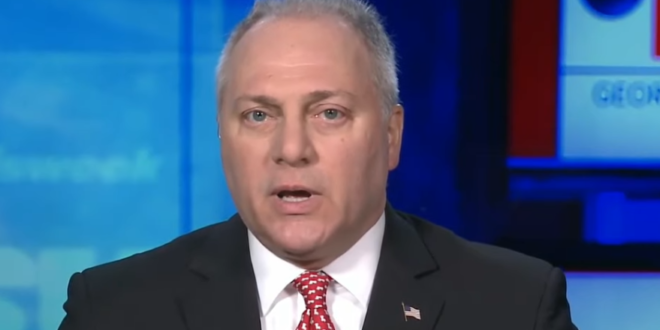 House Minority Whip Steve Scalise (R-La.), who last week visited former President Trump at Mar-a-Lago, on Sunday deflected blame away from Trump for the deadly riot at the Capitol. “At the end of the day, the people who stormed the Capitol on January 6th, it was a disgrace and they need to be held accountable,” Scalise said.

“That’s obvious,” ABC’s Jon Karl responded. “I’m asking about Donald Trump’s role in this.”  “All they’ve done since the day [he] walked into office was try to impeach him,” Scalise said. “So you’re saying he doesn’t bear responsibility?” Karl asked.

Karl moved on from there by asking Scalise if he agrees that the 2020 election “was not stolen,” and that Joe Biden is the legitimate president.

Scalise answered that “Joe Biden’s the president,” then went on about how “there were a few states that did not follow their state laws. That’s really the dispute that you’ve seen continue on.”