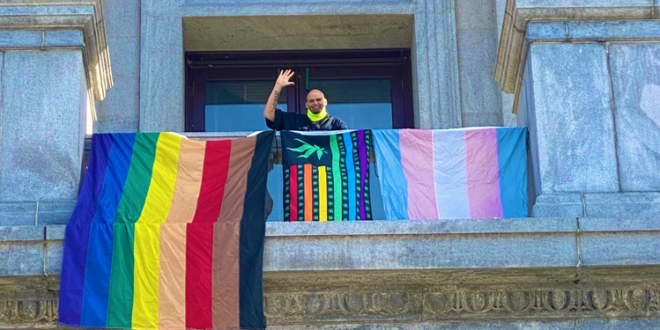 Pennsylvania Lt. Gov. John Fetterman, a Democratic Senate candidate, has replaced the pro-weed and LGBTQ rights flags hanging from his office balcony with bigger ones after lawmakers moved to ban the display. The legislation passed last month, and Fetterman has since been vocal about his intentions to defy the order until state lawmakers legalize marijuana for recreational use or make it illegal for employers to discriminate against someone based on sexual identity and gender orientation.

Earlier this month Fetterman filed to run for the US Senate seat to be vacated by retiring GOP Sen. Pat Toomey.

Since they passed a law that said I can’t fly my old 🏳️‍🌈🏳️‍⚧️ + weed flags from my office balcony, I figured new, bigger ones would be legal pic.twitter.com/L4PIe6zX2J

Spoiler: Passing laws would indeed make my flags go away.

Just not that one. Let’s do the right things for Pennsylvania. 🏳️‍🌈🏳️‍⚧️🇺🇸