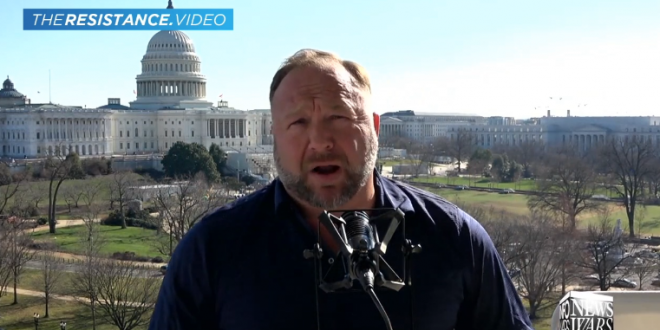 Alex Jones: WH Told Me “Lead The March” On Capitol

Ladies and gentlemen, when I tell you this, it’s not to brag about my connection to this embattled president because that in the modern world is a millstone around my neck. It’s to understand what happens.

And then the White House told me three days before, “We’re going to have you lead the march. The Secret Service — before Trump finishes, 30 minutes before — so we’ll lead you to a point, take you out of the front row and lead you to the place where they want you to start the march and Trump will tell people, ‘Go, and I’m going to meet you at the Capitol.’”

There was a million people outside of the Ellipse that was — you know, metal detectors, folks coming in. And so, by the time I got out there 20 minutes, 30 minutes before Trump finished his speech there were already hundreds of thousands of people ahead of me marching. A

nd before Trump ever took the stage, antifa, dressed up — over a hundred of them — as patriots, was there. They had their classic elbow pads and knee pads, because that’s what the wimps wear, out there screaming, “F antifa” and Proud Boy chants to try and blame the Proud Boys.