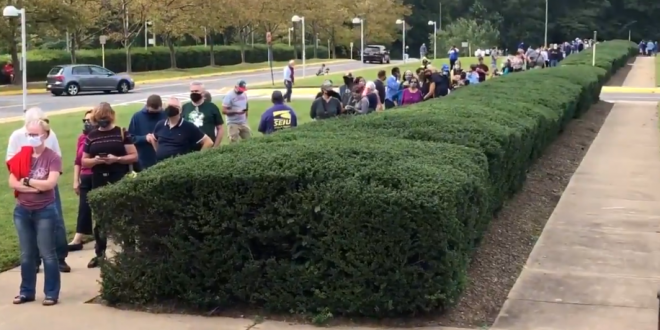 In Fairfax County, election workers were scrambling to open an additional voting room at the county government center where a line of hundreds of voters, spaced six feet apart, stretched down the block.

Long lines were also evident in other northern Virginia locations, where Democrats outnumber Republicans. Equally long lines, though, were reported in Virginia Beach — where voters stood in the rain — and other parts of the state as well.

Hundreds of voters line up in Virginia as the first day of early in-person voting begins in the state.

“I don’t trust the mail right now,” one voter tells @KristenhCNN. “…If I got to stand here all day, I’m going to vote today.” https://t.co/0c6Nesht4Z pic.twitter.com/mG7Yj2DWpf

Voters say they are willing to wait in line all day long to cast their ballots as massive lines form in Virginia for early voting. pic.twitter.com/aUM2gQs0de