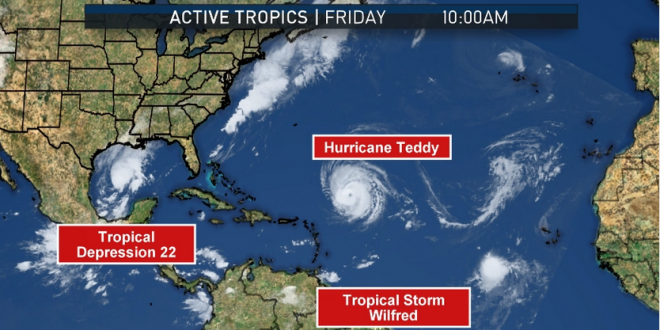 Hurricane Center Uses Up All Of 2020’s Storm Names

Tropical Storm Wilfred formed in the eastern Atlantic Ocean Friday morning, using the last of the traditional names for tropical systems in a record-setting Atlantic hurricane season. “Wilfred” is the last name on the Hurricane Center’s list of storm names for this season.

“Get out the Greek alphabet,” the National Hurricane Center tweeted. The only time they had done this before was in the deadly 2005 hurricane season, during which Hurricane Katrina devastated New Orleans.

It has been a very active season and its not over yet! Hurricane season in the Atlantic Ocean runs through Nov. 30. Each year, there are only 21 storm names on the list put out by the National Hurricane Center, the letters Q, U, X, Y, and Z are skipped.

Tropical Storm #Wilfred Advisory 1: Wilfred Forms in the Eastern Tropical Atlantic. Get Out the Greek Alphabet For the Rest of 2020. https://t.co/VqHn0u1vgc

BREAKING: Tropical Storm #Wilfred has formed in the Atlantic.

This means we’ve now used all 21 names of the 2020 Atlantic hurricane season and will start using the Greek alphabet. @NOAA has predicted up to 25 storms, which would include #Alpha, #Beta, #Gamma, and #Delta. pic.twitter.com/317GQHvXgB