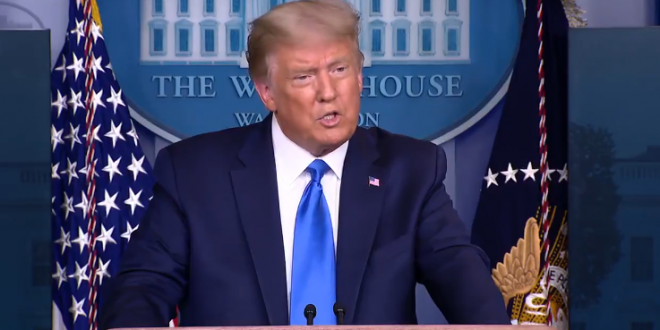 President Donald Trump would not commit to saying he would provide a peaceful transition of power after Election Day.

“Well, we’re going to have to see what happens. You know that I’ve been complaining very strongly about the ballots and the ballots are a disaster,” Trump said at a press briefing at the White House on Wednesday evening, presumably referring to mail-in ballots, which he has baselessly claimed will lead to voter fraud.

“(G)et rid of the ballots and you’ll have a very … there won’t be a transfer, frankly. There’ll be a continuation,” he added, saying “the ballots are out of control.”

Reporter: “Win, lose or draw in this election, will you commit here today for a peaceful transferal of power after the election?”

President Trump: “We’re going to have to see what happens.” pic.twitter.com/h5RF3dKPD1

There have been many bitterly fought elections in American history of course, but never – never – has a president refused, in the event of defeat, to commit to a peaceful and honorable transfer of power, as President Trump did minutes ago

The president refuses to commit to a peaceful transfer of power. Next week, Republicans will praise Donald Trump’s Supreme Court nominee as a constitutionalist. But they won’t criticize the president for refusing to pledge to uphold the very foundation of a constitutional order. https://t.co/7ui33P1GPC