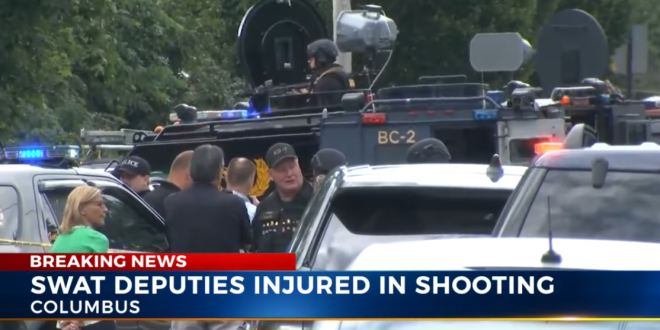 A woman who was arrested Friday after refusing to leave a Delaware County hospital because she was not wearing a mask is believed to be the person who barricaded herself inside a North Linden home after shooting two Franklin County sheriff’s deputies Tuesday morning. Monica Greer Justice, 53, was believed to be inside the home in the 2700 block of Beulah Road. She was arrested about 3 p.m. after a 7-hour standoff. She was apprehended on the roof of her home.

According to Franklin County Municipal Court records, the owner of the home on Beulah Road where Justice lived had filed paperwork for an eviction in April. A “set out” order was issued on July 1. The deputies, who have not been identified, were both shot in the back of the leg by the person inside the home, believed to be Justice. Both were taken to OhioHealth Riverside Methodist Hospital in stable condition.

According to the above-linked report, the same woman was sentenced to a year in prison in 2014 after assaulting a police officer.

UPDATE: A reader writes to note that I missed a line in above-linked story which mentioned the “mental health evaluation” aspect. I’ve therefore updated the headline.