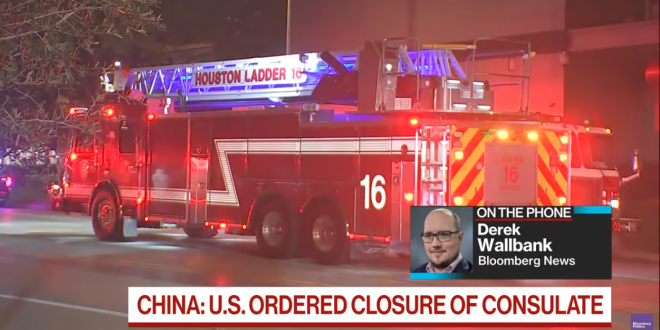 The United States said Wednesday that it has ordered China to close its consulate in Houston “to protect American intellectual property” and the private information of Americans.

China strongly condemned the move, the latest in a series of steps by the Trump administration as it ratchets up pressure on the world’s second-largest economy over trade, technology, human rights and security.

Firefighters responded to reports of papers being burned on the consulate grounds Tuesday night but were barred entry, according to Houston news media reports. The U.S., in a brief statement, did not provide any details on why the consulate in Texas was targeted.

Beijing vowed to retaliate, calling the order “an unprecedented escalation” in a broader conflict between the world’s two biggest economies, which now encompasses trade and technology, freedom of the press and religion, and the novel coronavirus and the race for a vaccine.

“The U.S. has far more diplomatic missions and staff working in China. So if the U.S. is bent on going down this wrong path, we will resolutely respond,” Wang Wenbin, a Foreign Ministry spokesman, told reporters Wednesday.