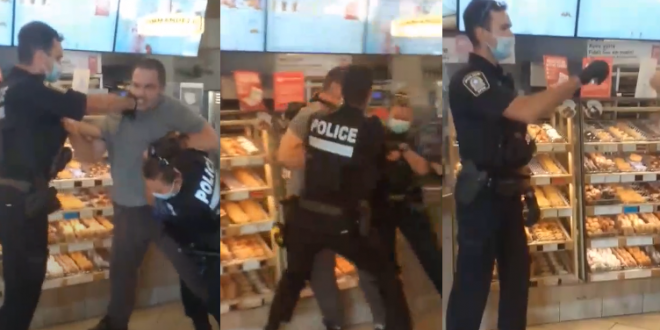 Quebec’s mandatory mask rule in public indoor spaces went into effect on Saturday and not everything is going as smoothly as many thought or planned. Sandra Bourgoin posted a video on Facebook Saturday afternoon of a man in a local Montreal Tim Hortons being asked to wear a mask by a police officer.

In the now-viral video, after several tries, the man still refused to wear a face-covering as required by government orders. Montreal police confirmed the incident occurred at the establishment on Papineau Street in the Villeray–Saint-Michel–Parc-Extension borough at 12:35 p.m.

According to Montreal police spokesperson Caroline Chèvrefils, pepper spray was used during the arrest. The man was eventually let go and was given a date to appear in court for resisting and/or willfully obstructing a peacekeeper.

Previous Trump Cultists Who Defaced Trump Tower BLM Mural Repeat Stunt In Harlem And Brooklyn After Release
Next Lincoln Project: Portland Is How It Starts [VIDEO]