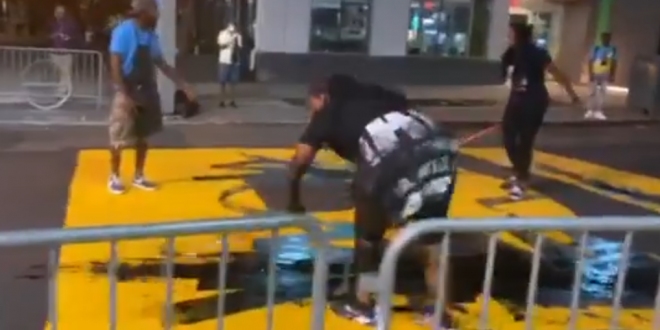 The black woman busted for dumping paint on the Black Lives Matter mural outside Trump Tower live-streamed the entire stunt — and was at it again just hours later in Harlem and Brooklyn.

Bevelyn Beatty, 29, posted videos to her Facebook page showing her smearing paint on the Midtown skyscraper, and BLM murals in Harlem and on Fulton Street later in the night, then gloated about it from home on yet another video.

“Ya’ll, we did an all-nighter,” she said in the most recent post. “Let me tell you something, yesterday was epic.” In a third video posted early Sunday, Beatty and another woman are seen dumping black paint on another mural on Fulton Street in Brooklyn.

Two women charged with splashing paint over the Black Lives Matter mural in front of Manhattan’s Trump Tower were identified Sunday as attention-seeking anti-abortion protesters who have pulled similar stunts before.

The pair were arrested last month for protesting outside Planned Parenthood’s New York headquarters. They were also charged with disorderly conduct when they disrupted a council meeting in a suburb of Fort Myers, Fla.

The duo also took an unwelcome trip to Kentucky to attend a Easter Sunday service held in defiance of the governor’s April coronavirus stay-at-home order.

In the clips below, you’ll see enraged passersby screaming things like, “Fuck you! You’re a black woman! What the fuck’s wrong with you?”