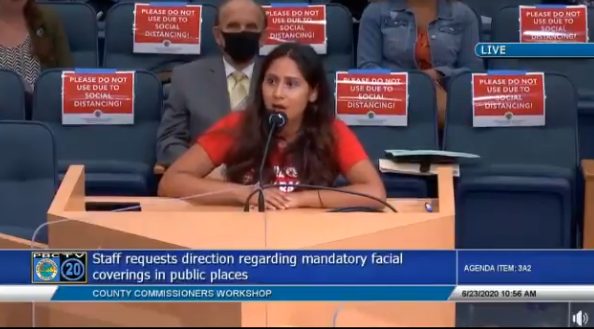 “Are you insane? Are you crazy? I think all of you should be in a psych ward right the heck now. Because none of you, none of you know what the hell you are talking about. This is insane. And then you want to open the meeting with a prayer to God. Are you praying to the devil? Because God is not listening to that prayer. Because all of you are practicing the devil’s love.

“What happened to Bill Gates? Why is he not in jail? Why is Hillary Clinton not in jail? Why are all these pedophiles that are demanding you all to listen to their rules, why are they not in jail? Oh, is it because you’re part of them? The deep state is going down and if any of you are in the deep state, you’re going down with it.” – Palm Beach Karen, in a rant that has gone wildly viral since yesterday’s JMG report on the same meeting.

This angry Florida woman argued today against the mask mandate, while bringing up the devil, 5G, Bill Gates, Hillary Clinton, “the pedophiles” and the deep state.