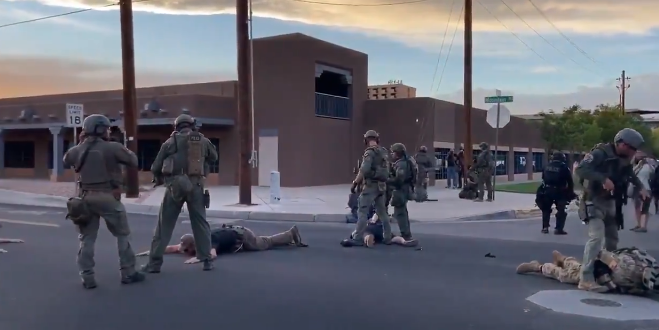 Protesters in Albuquerque wrapped a chain around the neck of a bronze statue and began tugging, chanting “Tear it down,” shortly before sunset on Monday. Their efforts to pull down a monument of Spanish conquistador Juan de Oñate suddenly stopped as four shots rang out.

Most people instinctively turned toward the noise, videos from the scene show. A few screamed. Just yards away, a group of militia men sporting militarylike garb and carrying semiautomatic rifles formed a protective circle around the gunman.

The gunshots, which left one man in critical but stable condition, have set off a cascade of public outcry denouncing the unregulated militia’s presence and the shooting.

Police say they arrested Stephen Ray Baca, 31, in connection to the shooting. He has been charged with aggravated battery. The injured man was transported to the hospital for treatment. He is listed in critical but stable condition.

Moments before protesters were about to remove the statue with a chain, a struggle broke out among the crowd. Video footage shows the protesters directing their attention toward a man brandishing a gun.

“Get his license plate,” screamed one protester in the video. “Follow him.” A group of protesters pulled the subject to the ground. After a few seconds of struggle, the subject shot his gun four times

Chain is up and around @KOB4 pic.twitter.com/LfXUZHGoNl

You can see the Armed men surround a man in a blue shirt. Very unclear who shot @KOB4 pic.twitter.com/mPsz7gjmDz

I am calling on the U.S. Department of Justice to investigate the shooting that just occurred in front of the Albuquerque Museum.

This is not the first report of heavily armed civilian militias appearing at protests around New Mexico in recent weeks. These extremists cannot be allowed to silence peaceful protests or inflict violence.

My statement on the “militia” and violence in Albuquerque tonight: pic.twitter.com/BZISvyau3k

This is the shooter. He said, “My father is the BCSO (Bernalillo County Sheriffs Office).” pic.twitter.com/YRGL3mjljj

Seconds after this guy shot into the crowd hitting one person (who is in bad condition), his fashy NMCG buddies surrounded him to protect him from the people. These guys were working with the cops weeks earlier. pic.twitter.com/6TFyDIQc99

The shooter’s name is Steven Baca. He’s the son of a former sheriff and once ran for ABQ city council. https://t.co/Wh91U3tcZb pic.twitter.com/FnhwDhQEzN

One of these New Mexico right-wing militia members just shot a person.

Notice how calmly they’re all being detained.

Don’t tell me George Floyd and Rayshard Brooks and Eric Garner—who did not harm anybody—couldn’t be treated differently. https://t.co/itfCvvUg53