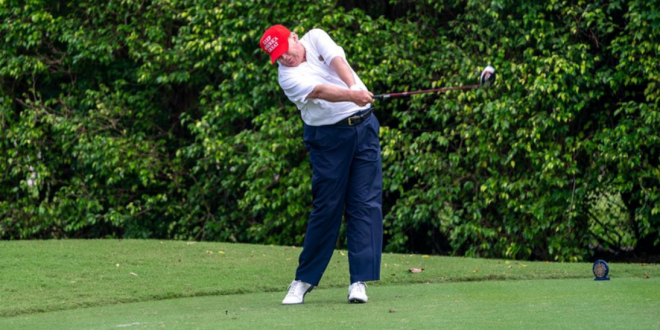 Advisors Talked Trump Out Of Golfing This Weekend

President Donald Trump had planned to spend this weekend in New Jersey at his Bedminster golf resort, but the White House opted to change course and cancel the trip a few days ago in large part due to the potential for “bad optics” of the president at one of his private clubs as national protests continue, according to two people familiar with the decision-making.

The original idea was to travel from Maine — where he visited a plant manufacturing coronavirus testing supplies — to New Jersey on Friday and spend it as “working weekend.”

But the president ultimately agreed with his advisers that the plan could be problematic as thousands of demonstrators descended on the White House on Saturday for another day to protest the killing of George Floyd in police custody, the people familiar with Trump’s choice said.

Previous Incel Plotted To Bomb Cheerleaders, Blew Off Own Hand
Next DC Mayor: Trump’s Actions Made The Protests Bigger