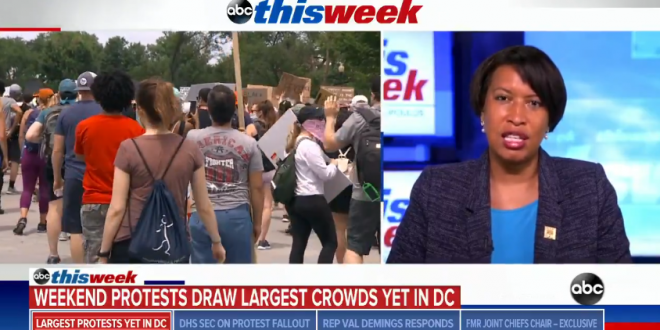 “What Americans saw was federal police forces tear gassing peaceful Americans — and how they responded made clear to the president that Americans would exercise their First Amendment rights and they will do it peacefully,” Bowser said on ABC’s “This Week.”

She told co-anchor Martha Raddatz, “What (Trump) actually did — as you saw for the remaining days — was turn out more people and more people who were there for peaceful protests.”

After Bowser’s appearance on “This Week,” the president tweeted that he had ordered the National Guard to withdraw from Washington, “now that everything is under control.”

D.C. Mayor Muriel Bowser tells @MarthaRaddatz the federal response to George Floyd protests and Trump’s rhetoric encouraged more people to demonstrate: “What he actually did … was turn out more people and more people who were there for peaceful protests.” https://t.co/5LnuhcnzxG pic.twitter.com/gHPH2o83R0

JUST IN: Pres. Trump says he has ordered the withdrawal of the National Guard in Washington, D.C, “now that everything is under perfect control.”

“They will be going home, but can quickly return, if needed.” https://t.co/OmtbINLNsx pic.twitter.com/AFv5lQ4RZd